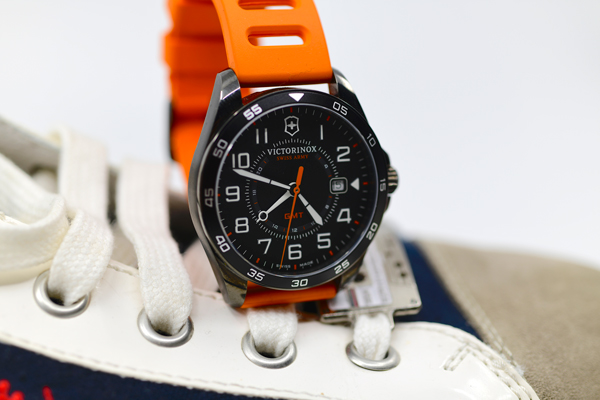 Early 21st century adventurers (that’s us, folks), have rocked specific brands for their excursions: a Nalgene water bottle, a G-shock watch and a Swiss Army knife. Victorinox is taking square aim at one of these three icons with their new FieldForce SPORT GMT, in a bold grab for wrist space in the casual/sport/urban adventurer/under $500 category. 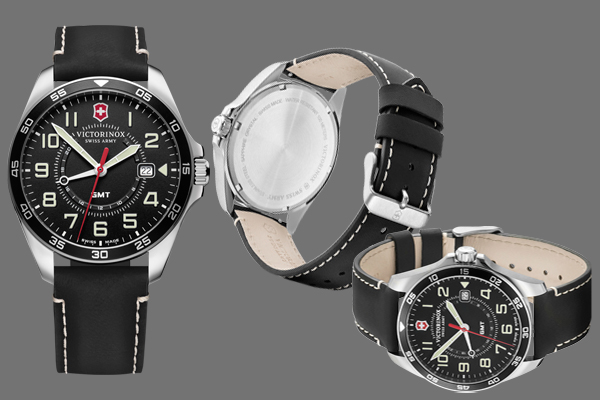 Victorinox’s targeted Adventurer goes to the salon for a beard trim and a an undercut, frequents the gym, the office, the dog park (or used to when the watch was designed) and maybe a trail or two on the weekends, but never leaves the confines of society. He’s not the former military/Tough Mudder/first responder/ G-Shock Adventurer, he’s the kind who buys a stretchy J Crew suit and sprints the last block to the liquor store for a bottle of Pinot (that’s the weekday workout.) In short, it’s a sport watch for Adventurers who don’t want to sweat.

The FieldForce looks as svelte and trim as Its intended wearers wish they did, with a sleek gunmetal PVD 42mm case and flashy orange rubber band. Picture the Adventurer cruising along in a sports jacket with lululemon running pants and immaculate sneakers. Housed inside the 100-meter water resistant case is a Victorinox utilitarian Swiss quartz movement which powers traditional and 24-hour GMT hands, both of which are set easily, along with the three o’clock date. Sturdy sapphire protects the subtle glint of Super-LumiNova® lit dial. The watch is available in a variety of flavors and band treatments and features a respectable five-year warranty.

Past technical specs, should you buy it? It is light and comfortable to the point where you could forget you were wearing a watch if it weren’t for that bright orange band. Durability scores a 10/10. Keys and coins proved no match for both sapphire and case and if you were to take it off and drop it, cement floors — well you know how the saying goes “you don’t hit it with __, you hit __ with it.” Plus, no frequent flier remorse, GMT setting, and readability is flawless.

Gripes? If you are equipped with anything less than night vision goggles, reading this watch is difficult at night. This lume could give Vantablack a run for its money. Speaking of money…at $425, it lives in the upper echelon of prices anyone will pay for a quartz movement (that isn’t produced by Tag, Breitling, Omega or Rolex – but that’s’ a whole other article). With its flashy looks, coworkers and athletes will ask the Adventurer what’s on his wrist (when people are actually allowed to mingle again) and he’ll proudly claim, “it’s a Victorinox.” And for at least five years he’ll be assured that his timepiece will stand up and preform, and that’s only .23 cents a day! 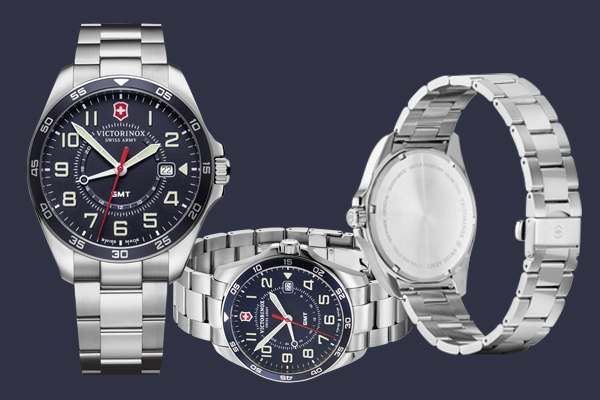