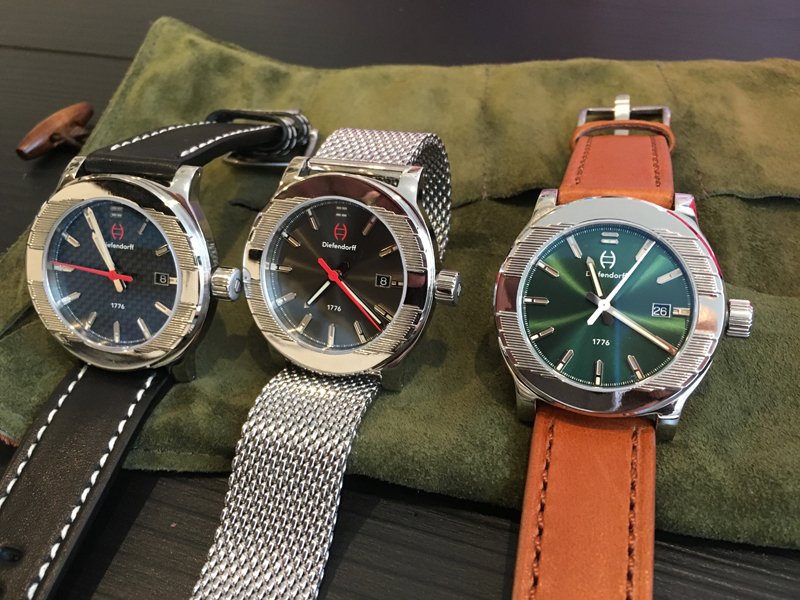 Too few watch designers take advantage of the real estate found on the bezel. As a frame for the dial, the bezel is typically where designers place the watch’s numerals or markers, perhaps with some color, in pursuit of basic watch functionality.

Not long after I first strapped on the Diefendorff Cornelius 1776 it became clear that James Reeves, founder of the new, Brooklyn-based Diefendorff watch company, took full advantage of the bezel by utilizing it much like a painter’s palette for this first model in the Cornelius collection.
This is exactly why on the 1776 bezel and case Reeves has etched an appropriate seventeen large lines and seventy-six thin lines. The lines (Reeves has applied for an international design patent for these) represent his brand’s Revolutionary War-era inspiration. It turns out that Reeves is the sixth great-grandson of Captain Henry Diefendorff, who fought in that war.
And this bit of ancestral connection was just the start of the new brand’s origin story. It quickly became clear that Diefendorff should be the company namesake for several reasons, Reeves says.
First, the Captain was an immigrant from Switzerland, home of modern watchmaking, and also home to Sellita, which makes the automatic movements Reeves uses in this collection. Second, Captain Diefendorff was killed during an ambush in upstate New York on August 6, 1777, exactly two hundred years earlier to the day on which James Reeves was born. 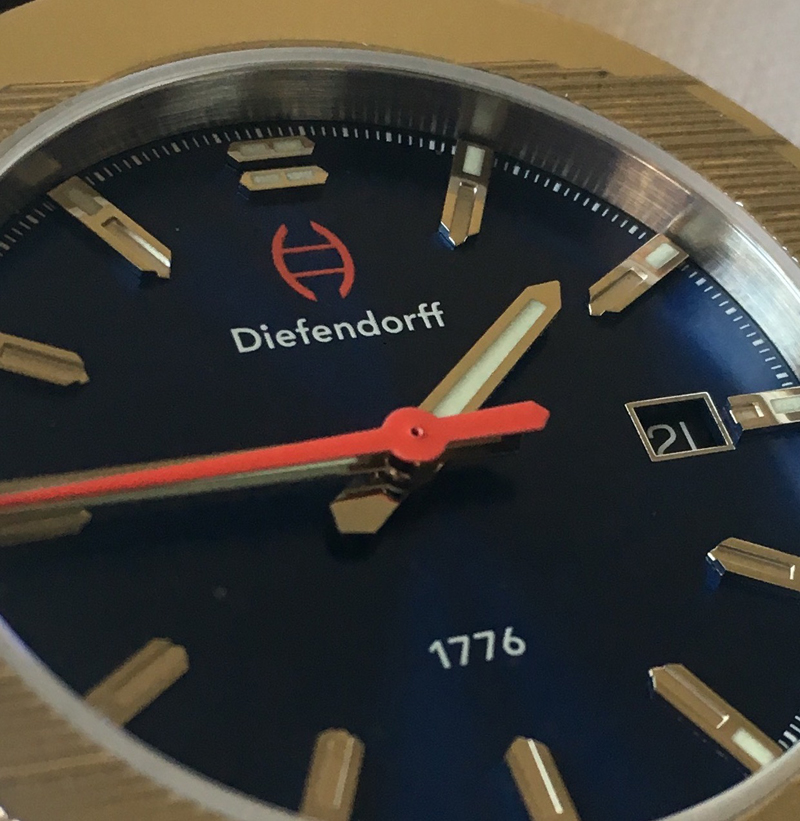 But interesting history is only part of the reason for wearing any watch. Another determining aspect is, of course, the dial. While Diefendorff offers the 1776 with Forest Green Sunray, Charcoal Sunray and particularly rich Woven Carbon Fiber dials, I chose the 1776 with a Federal Blue sunray dial to test. My choice was made simple from the moment I first eyed the watch because the its fiery Swiss red seconds hand and red logo seem to jump directly from the dial.
It’s always a pleasure to wear a watch with carefully considered design details, and the Diefendorff Cornelius 1776 is one of those watches. The logo is Reeves’ interpretation of a modern U.S Army captain’s logo, again in honor of Captain Diefendorff. Reeves has curved the original insignia so that its contours align with the 1776 case and lugs, specifically with the two horizontal large and small line patterns that so distinctively cross the bezel. In another touch of detail, the two bars at the top of the dial echo the two crossbars in the logo.

On the wrist the watch is quite comfortable and, with its polish and distinctive bezel, casually elegant. Moderately thick at a hair over 12.4mm, the 42mm steel case is polished, which of course can retain fingerprints more so than a matte or a lacquered bezel. But as noted at the start of this review, the bezel also features large and small horizontal lines, all of which more or less mitigate this tendency with a diverting, eye-catching design.
A look at the back of the watch reveals a customized Swiss red rotor. Though at first glance the rotor’s hue reminded me of the color Oris uses on its oscillating weights (many of which are also supplied by Sellita), Diefendorff is careful to break up the design a bit by applying its distinctive company logo. The rest of the movement is relatively plain, with no additional décor applied. I expect this basic treatment with watches in this price range.
I’d be remiss if I didn’t note the terrific black leather strap attached to the Diefendorff Cornelius 1776 I wore.
Unlike other brand new leather watchstraps I’ve worn, this 22mm vegetable-dyed strap (supplied by an American company) with contrasting cream stitching was particularly supple. There’s no break-in period necessary for these straps, as they arrive comfortably flexible and quick to buckle. The two wide keepers effectively kept the strap end restrained. If you prefer another color, or would like a Milanese-type steel strap, Diefendorff offers options on its website for very reasonable prices.

Diefendorff founder James Reeves has seriously linked his own ancestral trail to this collection. He honors his Swiss roots with a Swiss-made movement (and a name that doesn’t roll off the tongue) while also utilizing domestically sourced straps and a U.S.-based final assembly process. As a bonus, Reeves founded Diefendorff as officially ‘carbon neutral’ and donates ten percent of its profits to environmental charities.
Thus, the Diefendorff company tag line, “We are the American watch company for people who do life differently,” seems to be an appropriate summary of Reeves’ intentions.
If you’re in the market for a nicely designed casual-wear automatic watch with numerous distinctive design elements, and are an American history buff to boot, Diefendorff has four options you’d enjoy within this debut Cornelius 1776 collection. Prices start at $899. 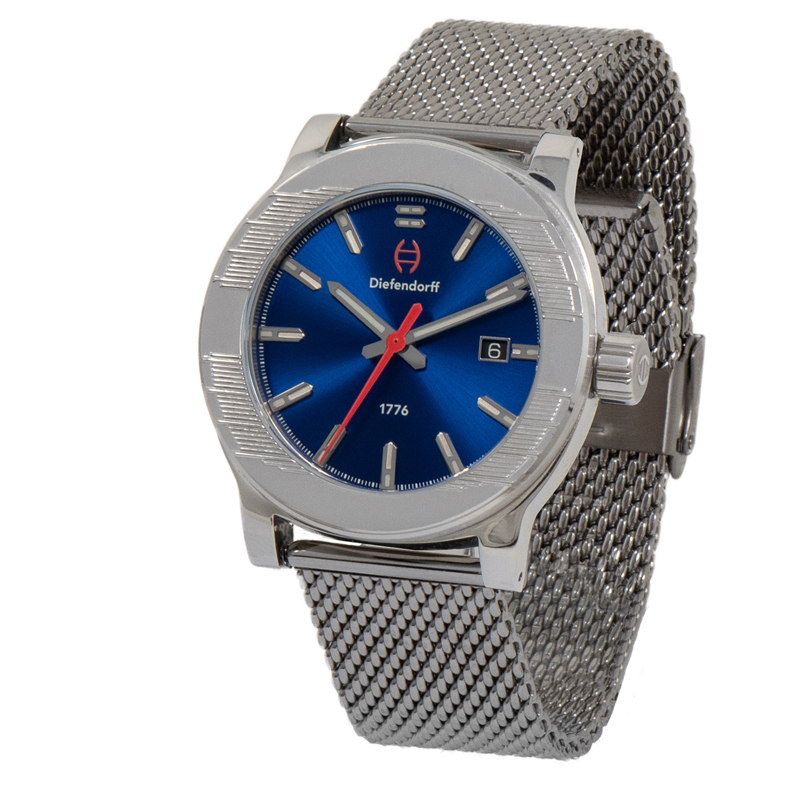