District Time - An Interview With Bill McDowell and Loren Sciurba 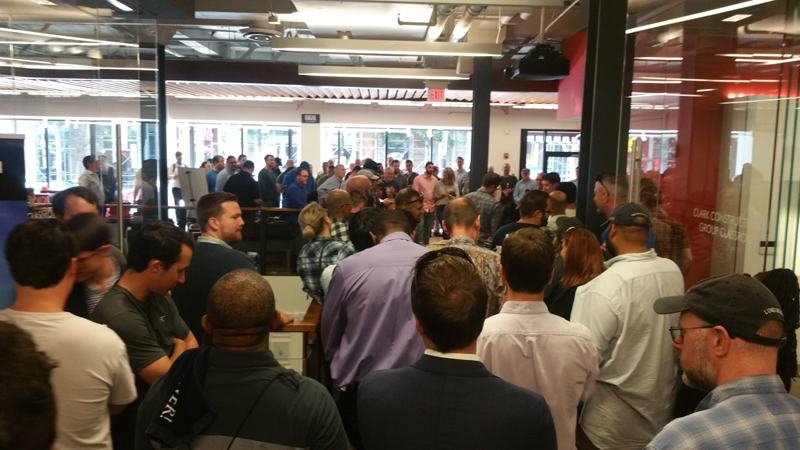 District Time is an annual watch show held in Washington, DC. Now in its fourth year, it has become a must-see event for watch enthusiasts, especially those who like small, independent watch brands and affordable vintage pieces. The 2019 event will take place on October 12th and 13th, and it promises to be the biggest yet. AboutTime has participated in the past and will return this year. We sat down with the event’s organizers, Loren Sciurba and Bill McDowell, to talk about who they are, and what drives the show. 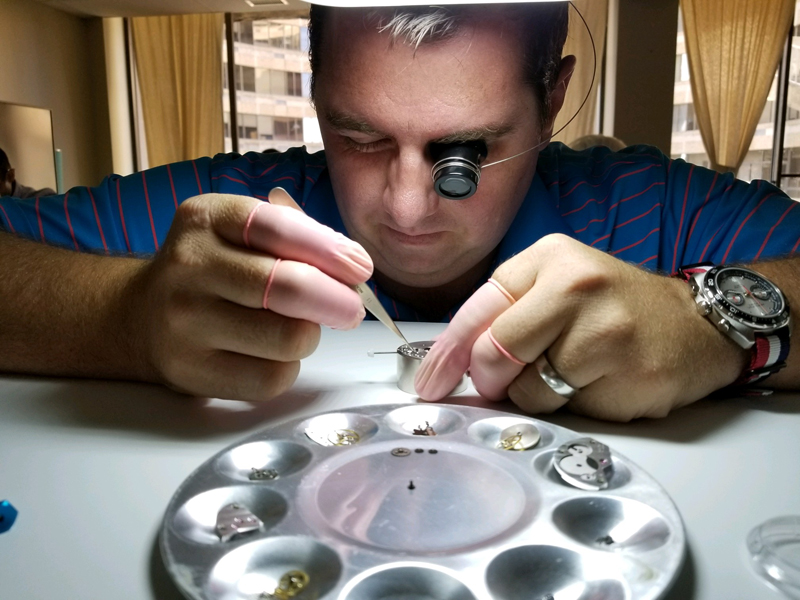 Bill is the founder of McDowell Time, a microbrand watch company located in Rockville, Maryland. He takes great pride in the fact that his watches are assembled in the United States and fitted with American crafted straps. We asked if it wouldn’t be cheaper to outsource, and Bill admitted that it would, but he has other concerns. “It’s part patriotic, part practical,” he explained. “Of course, I am committed to helping create American jobs whenever possible, but also, with assembly in the states, I can keep a closer eye on quality control too. It may be more expensive, but it makes me feel good about the product I’m putting my name on.” 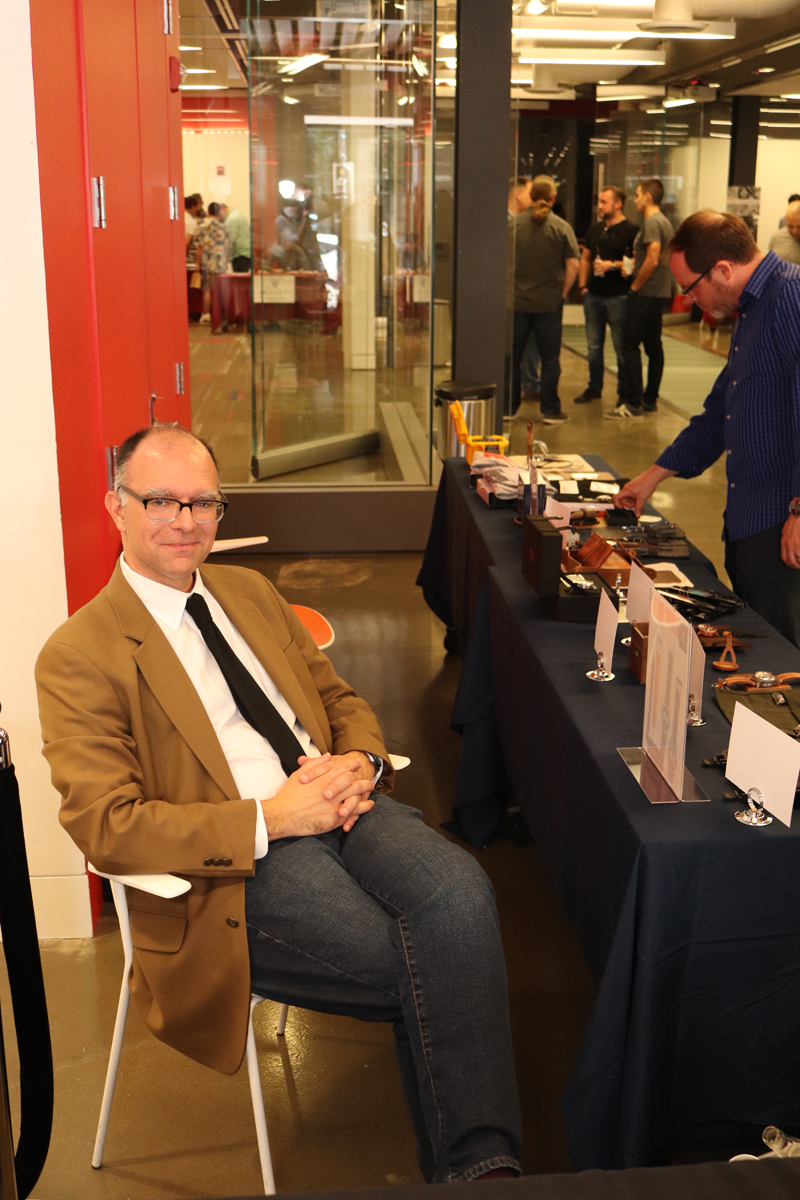 Loren publishes TheTimeBum.com, a popular watch review site that extends a considerable amount of its coverage to microbrands. “I’ve got to admit that watch blogging was a weird niche to get in to,” he said. “I mean, it’s rather odd that total strangers around the world care what I think of a new watch, and yet, it’s great fun, and I’ve gotten to know some terrific people who are truly passionate about all kinds of watches.”

It was this shared passion that inspired Bill and Loren to start their show. “It was Bill’s idea,” said Loren. “We had met when I reviewed his first watch and kept in touch after that. I had organized a couple of get-togethers and a small band of watch nerds who occasionally met for dinner, but nothing too big. I kept thinking there was the potential to do more. In early 2016, Bill raised the idea of a microbrand watch event, I thought it was brilliant.”

Bill described how he had seen watch events and enthusiast communities coming together elsewhere, mostly New York, but not in DC. “It just didn’t make sense.,” he said. “With a large metropolitan region that arguably stretches from Baltimore to Richmond, I knew there was more than enough local interest to support a show.”

Loren agreed and added, “Everything is online now — and it’s great. I mean, it’s the reason I could come out of nowhere and publish my reviews. It’s how one person can start a watch company and deliver a product to a worldwide market. It kind of makes our hobby tick, if you will, but it has its limitations too. You can browse photos and specs online all day and still not really appreciate how a watch will appear in real life, or how it will feel on your wrist. For all the online chatter, there is a weird divide between the product and its consumer. We wanted to bridge that gap.”

They dubbed their event “Microbrand Meetup” and booked a dining room at a local restaurant. “The plan was to attract 10 watchmakers and maybe 50 or so attendees,” said Loren, “but then...” he rolled his eyes. Bill jumped in, “It was crazy! We had 20 brands on board, filling every flat surface in the room, and well over 100 people were crammed in there so you could hardly move.”

Over time, the partners have improved the show. In 2017, they moved it to its current home at the District Architecture Center (DAC), a spacious, stylish venue in DC’s bustling Penn Quarter neighborhood. In 2018, they settled on the District Time name. “Microbrand Meetup sounded like a private event,” said Bill, “and frankly, right from year one we had established independent brands like Doxa on board, and more recently, authorized dealers bringing watches from Nomos and the Grand Seiko collection, so it was never exclusively micro either.”

Another key change was the addition of a principal sponsor, Janis Trading Company, the maker of NTH watches. “Chris Vail [Janis’s owner] has been a huge supporter of the DC show since day one,” said Loren. “The energy he brings is phenomenal.”

District Time has matured since the first event in 2016. Last year, between the vendors in attendance and those that had sent watches or accessories for display or as door prizes, over 40 brands were represented, not counting the wide variety of new and vintage watches brought by dealers. Attendance in 2018 was about 400 people for a 5-hour show. “It’s amazing how excited and knowledgeable the crowd is,” said Loren. “They drive in from all over the mid-Atlantic, they are waiting at doors when we open, they know most of these brands, and they are looking for watches that they have read about in the forums or seen on Instagram. They want to be the first to see prototypes and find brands most people haven’t heard of yet. And they bring a ton of questions for the owners. I love it that our attendees really respect what the brands are doing, and in the last two years, in particular, they arrive ready to bring some of those watches home.”

As successful as the previous years have been, Loren and Bill are thinking bigger. “We want District Time 2019 to be part of a greater #DCWatchWeek,” said Bill. “On the 10th and 11th, Vail will host his Microbrand University nearby, which is an ideal opportunity for folks who are just starting watch brands to learn business development techniques. Then our show will be the 12th and 13th at the DAC, and we’re talking to the Horological Society of New York about conducting their four-hour beginner’s watchmaking class both days.”

“Of course, we’ll have a whole crop of watches for sale too,” Loren added. “Most of the brands from previous years will participate, and we expect quite a few new ones too. That’s really the whole point, right? To get that huge variety in one place.”

At the time of the interview, the 2019 roster was still in its infancy, but we still had to ask which ones would be there. Bill put on his Trump voice, "Only the best brands, all the other brands are losers!” he chuckled. “We are still working on 2019, but you can see last year’s roster on www.dcwatchshow.com. We expect to have many of those same brands return, plus more,” he said, “but people really need to check the website for updates.”

“We’ve had watches from all over,” Loren added. “Last year, Mike Blythe of Draken Watches flew in from New Zealand, and Chip Yuen of Aevig was there from the Netherlands and brought the Holthinrichs collection too. Benjamin Chee has sent his high-end Chinese Maison Celadon watches every year, and last year he debuted his new Millésieme Swiss line. Collins Watches and the formerly local DC Vintage Watches fly in from California. Elshan Tang of Singapore has sent Zelos and Ventus watches. James Henderson’s table was like the UN; he brought some amazing stuff from Minase (Japan), Sartory-Billard (France), Revolo (Netherlands), and Montfort (Switzerland). We’ve also attracted local brands like Hager, Tsao Baltimore, and McDowell Time of course. John Kiel of WatchGauge had a huge display with almost a dozen brands for sale. Last year was amazing, and by extending the show another day, we hope to attract an even greater variety this year.”

When asked what lessons they have learned from hosting the previous three events, Bill did not hesitate. “Start early!” He exclaimed. “Having done this event for a few years, we've kind of figured out how to run the show, but it’s amazing how many small details crop up as the event draws near. We really have to stay very organized and try to knock out tasks as soon as possible.”

“Time is a killer,” Loren added. “Bill and I both have careers, families, a host of other responsibilities, and our own watch-related side projects to handle in addition to organizing the show. We could do so much more if we just didn’t need sleep.”

With all the effort, we wondered if it was worth it for them to keep hosting? “Absolutely!” Loren replied. “It’s great fun to meet the brand owners, representatives, and the enthusiasts. I want to see good ventures succeed. I enjoy watches, and I really respect the folks who are trying to make a go of it.”

Bill agreed. “It has been so satisfying to watch this idea come to fruition. The Time Bum and McDowell Time are both relatively new on the watch scene, so to pull off a successful show like this is more fulfilling than I would have thought.” He continued, “Other watch shows around the country may create a similar experience, but I think ours is set apart because we go out of our way to make it accessible to fledging brands that can really benefit from that face-to-face exposure.”

So after three shows, what are Bill’s and Loren’s favorite District Time moments? Bill went first. “I'm always surprised to see the camaraderie and friendship between the watch brands. Sure, each brand wants to sell watches, but I think we also genuinely like helping each other. It's kind of a fraternity of sorts. Turns out one of my favorites parts of the show is the vendor dinner beforehand, where all the brands get a chance to meet in person. I know this isn't part of the actual show, but it's my favorite part of the weekend.”

Loren agreed with Bill about the dinner, “But because I’m not selling watches,” he noted, “my perspective is a little different. During the show, I’m all amped up trying to make it all go seamlessly, and it’s kind of a blur, but I do enjoy hosting the giveaways. We always have a crazy number of prizes, and it’s all good stuff: watches, straps, travel rolls, that sort of thing. It’s a blast. Anyway, last year, the final giveaway prize of the day was an Avi-8 RAF Centenary with a cool translucent blue dial. The winner was this kid who could not have been more than 12 years old who came there with his watch-loving father. It was so big on his wrist I thought he might tip over but it didn’t matter. Both he and his dad were over the moon about it. It was great to see that moment and to know that we had probably just created a new watch enthusiast.”

Be sure to check DCWatchShow.com for news and updates on District Time 2019. When the doors open on October 12 and 13, AboutTime will be there. We hope you will too.