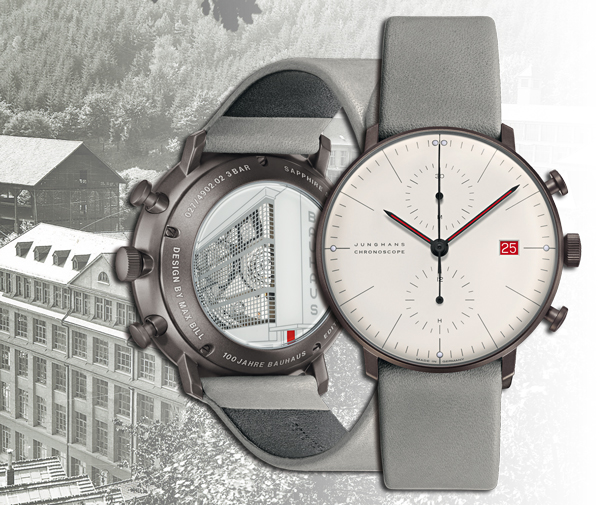 Junghans in 2019 celebrated the 100-year anniversary of the Bauhaus school of design, known for its “form follows function” minimalist tenets. But the German watch and clockmaker didn’t simply mark the one-century anniversary because the Bauhaus and the watchmaker share the same country of origin. Both watchmaker and design school also share the work of designer, sculptor and artist Max Bill, who has been the primary focus for the brand during the anniversary celebration.
The relationship between Junghans and Max Bill emerged most clearly when Bauhaus designer began creating clocks for Junghans in 1956. 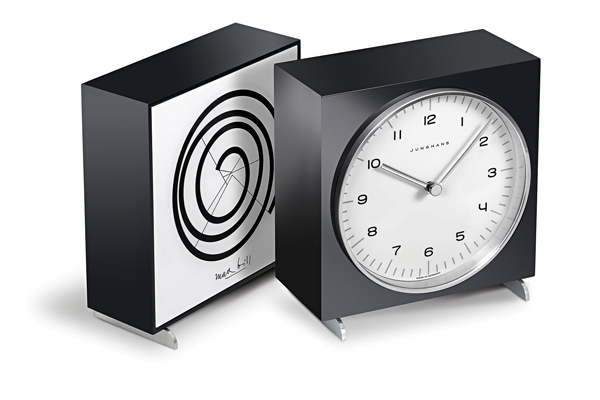 
But it was Max Bill’s first wristwatch design for Junghans in 1961 that underscored Junghans’ deepest, most substantial, connection with Bill’s philosophy. Those initial watches, a series of hand-winding dress models with thin markers and hands, epitomized the ‘less is more’ school of design, further enhancing the relationship and setting the tone for Junghans dress watches for decades to come. 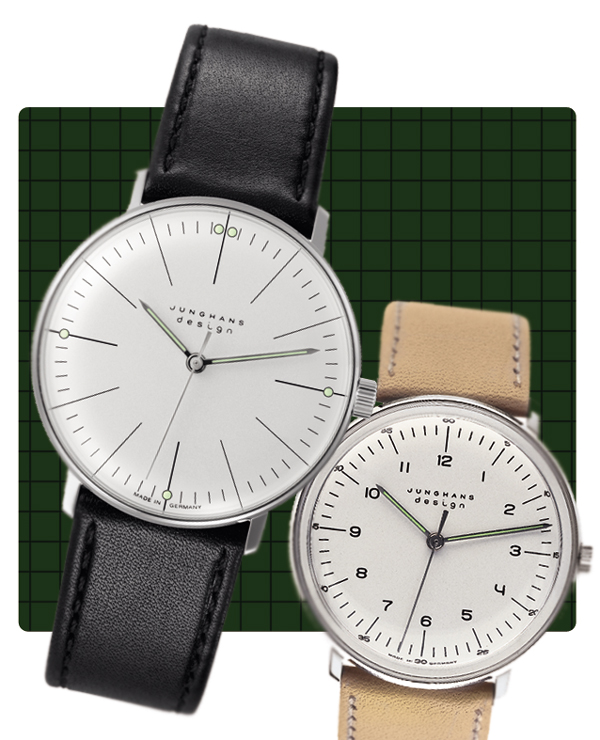 The majority of the Junghans Max Bill wristwatches maintain Bill’s clean dials unburdened with texts or extraneous numerals. If numerals are used, they are typically rounded and thin. Also, white or cream-colored dials dominate the range, with color used sparingly, if at all. The idea, according to Junghans, is to “gaze at the time” rather than focus on a design that overwhelms or distracts from its primary function.

Junghans has also been careful to adhere to the use of domed crystals that accentuate the historical resonance of the Max Bill collection. Junghans regularly checks in with the Max, Binia + Jakob Bill Foundation to maintain the connection with Bill’s design philosophy.

(Above: The windows of the Bauhaus building in Dessau are depicted on the back of the Junghans Max Bill Chronoscope 100 Anniversary provide a view of the automatic J880.2 movement)

Anniversary Models
Last year, Junghans celebrated the 100th anniversary of the Bauhaus with a series of watches, each issued in limited editions.
Among these special editions, one, the Junghans Max Bill Chronoscope ($2,295) 100 Year Bauhaus, perhaps most directly celebrates the Bauhaus school of design. Issued as a limited edition of 1,000 units, the watch is based on several of Max Bill’s original designs that specifically reference the Bauhaus school’s primary building in Dessau.

For instance, the 40mm steel-cased Chronoscope’s red hands and the date display are references to the Dessau facility’s red entrance door. The windows of the Bauhaus building depicted on the back provide a view of the automatic J880.2 movement, based on an ETA 7750. The watch’s strap and case are grey and anthracite to better provide a contrast with the dial. According to Junghans, this is meant to recall the play between light and shade during a sunny day on the windows of the building.

A white-gold-cased model, lunched earlier in 2019, is also available, as is an automatic, non-chronograph Max Bill Automatic Bauhaus edition.

Black & White Series
Junghans also released four Max Bill watches that celebrated the sharp black-and-white color scheme and fine numeral fonts favored by Max Bill.
On a set of four anniversary models, Junghans has placed a matte white dial within a darkened PVD-coated steel case, accentuating their contrasting colors.
One, the well-known Max Bill Chronoscope, is a 40mm automatic chronograph with a day-date indicator. Two additional models include a 38mm automatic three-hand watch and a 34mm automatic watch. Junghans is also offering the 38mm model with a quartz movement. All four sport a date indicator and are fitted with a grey calf leather strap with matching PVD-coated buckle. 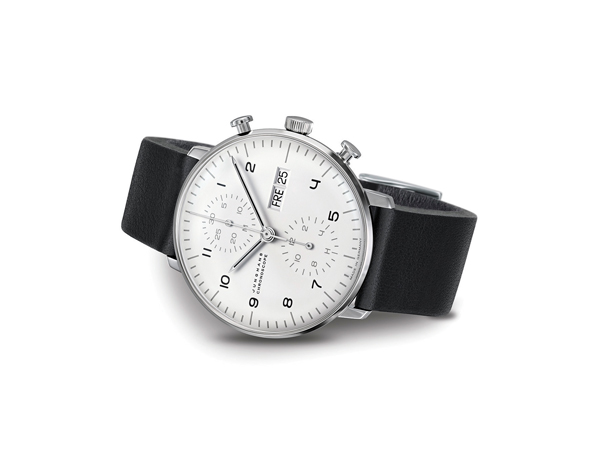 In fact the Chronoscope, a longtime favorite dress chronograph among the About Time staff, is even more instantly readable than in prior incarnations. The watch’s minimalistic style truly enhances its basic time-display function, which doesn’t always happen with design-focused dials.

Likewise, the smaller, time-only models confer the same unfussy attitude, while also offering not a single distraction—unless you count the handsome domed hard-Plexiglas crystal.
Junghans wisely enhances the visibility of time, and the usefulness of the black-white color contrasts, with a generous daubing of SuperLuminova of both dial (on the black font) and on all the hands. Prices: $2,095 (Chronoscope), $1,195 (Automatic), $1,095 Small automatic) and $625 (38mm quartz).

Clock and Watch
The Junghans Max Bill Edition Set 2019 ($2,195) celebrates the 100th anniversary of the Bauhaus with an automatic chronograph and a table clock with mechanical eight-day movement.

The dial design is based on the original Max Bill watches. Luminous hands and digits stand out on the white dial and against the black calf leather strap. The same minimalist look can be found on the table clock with its wooden case in black piano lacquer.

For a special effect, Max Bill’s handwriting is featured on both timepieces, as well as on the back of the case. Collectors will also find artwork from Bill’s “fifteen variations on the same theme” geometric art series. 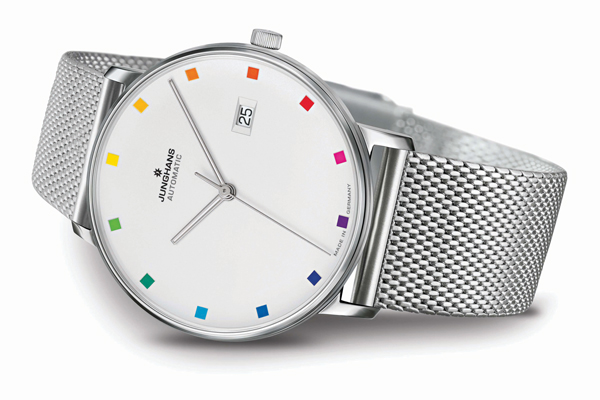 (Above: The Form A 100 Year Bauhaus. Junghans replaces all the hour markers on this watch’s dial with squares representing the shades
of the Itten color wheel. )

Color Too
Another prominent Junghans limited edition debut isn’t specifically made to celebrate the 100th anniversary of Bauhaus, but it jibes nicely with the German brand’s focus on minimalist design. And like the Max Bill collection watches, this new model stems from a specific European 20th century design philosophy.

The spare yet colorful watch is called Form A 100 Years of Bauhaus ($1,095), which is a 1,000-piece limited edition that commemorates the color wheel, an evolutionary look at primary, secondary and tertiary colors as espoused by Swiss-born painter and educator Johannes Itten.

Briefly, Itten was one of the first theorists to associate different colors with specific emotions. He studied how color impacts our moods, and how individuals perceive and react to color. To accomplish its ode to Itten’s artistic theory, Junghans replaces all the hour markers on this watch’s dial with squares representing the shades of the Itten color wheel.

A representation of the Itten color wheel idea on a round watch dial makes perfect sense for Junghans, a German-based watch and clockmaker steeped in Bauhaus design. Junghans spaces all twelve primary, secondary and tertiary colors evenly around the dial of the 39.3mm steel-cased Form A. Thus, the hour markers range from blue, yellow and red (primary colors) to secondary colors of orange, green and violet, and so on.

The result is an unusually cheery dial that, with the date window, is actually less minimalist and more practical than many Bauhaus-inspired dials. The watch’s slim bezel and thin hands complement minimalistic design concepts, though I’m not as sold on the fairly busy Milanese bracelet attaching the Form A to the wrist. A simple black leather or fabric strap might actually to a better job of highlighting the dial colors. Inside Junghans places the ETA-based J800.2 automatic caliber, visible from the caseback and sporting a logo-decorated rotor.