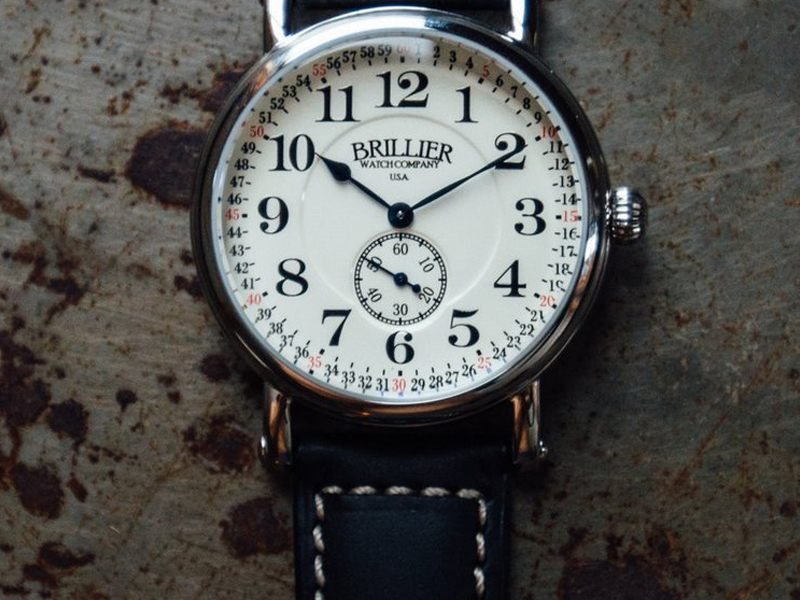 The phrase “making the trains run on time” has become synonymous with the idea of a well-oiled and properly functioning system. So, it’s only logical that trains and train travel would be deeply associated with watches and clocks that keep hyper-accurate time. Beyond this, there is a look and feel to a railroad watch that makes them almost instantly recognizable and distinguished from other timekeepers.

In that tradition, Brillier watches of Arizona has released a second chapter in their Americans series to celebrate the American railroad, with designs that harken all the way back to the “golden spike” that united the Union and Central Pacific railroads in Utah in 1869.

The dials of the two models are designed to hold the Railroad Standard for timekeeping devices. This includes easy-to-read, upright Arabic numerals and calibrated minute divisions of the five minute and minute divisions. Keeping the time up to the minute is critical to the success of any rail system, up and down the line.

The Americana collection draws inspiration from several American-made watch brands from the early days of the system. There are two distinct dial configurations. The Eastern Standard edition features the “Montgomery” dial configuration, which incorporates dominate Arabic numbers on the chapter ring with an outer ring that divides all 60 minutes with a red numeral at every five-minute interval. The Montgomery dial was favored by railroad workers of the early 1900s due to its easy-to-read configuration.

The other style, dubbed the Western Standard, utilizes the “Ferguson” configuration, which moves the 60 minute divisions to the dominate position, with the standard 12-hour dial being fully enclosed within it. This is done by way of a double-sunken, ceramic dial. The Western Standard sports blued, moon hands.

Both collections are limited to 100 pieces per dial and case combination. They are both 43mm in diameter and come with a handmade, genuine calf-leather strap produces in the United States. Both models use the Ronda Swiss parts 1069 quartz movement to maintain split-second accuracy. All Brillier watches are hand-assembled in the US.